“An accordion and a trumpet. They brought a sold-out house . . . to ecstasy. Their mixture of melodic jazz and musical cultures from a variety of countries and ages once again proved Eric Vloeimans’s absolute mastery. Accordionist Will Holshouser’s . . . is definitely on a par to it. Together they reached a result that can be considered consummate. ” - Rinus Van Der Heijden

Eric Vloeimans (NL) and Will Holshouser (US) play evocative, folk-inspired originals that mix European and American influences, plus a ballad by the late, great Prince. These two virtuoso musicians use the intimacy of the duo setting to full effect: lush trumpet and accordion textures, catchy melodies, and energetic improvising abound. With elements of jazz, chamber music, and world music, this pair is refreshingly hard to classify. Having just finished a tour of 28 concerts in the Netherlands in 2021, they plan to release a live album and tour in the US in fall 2022. (Photo at left: Merlijn Doomernik) 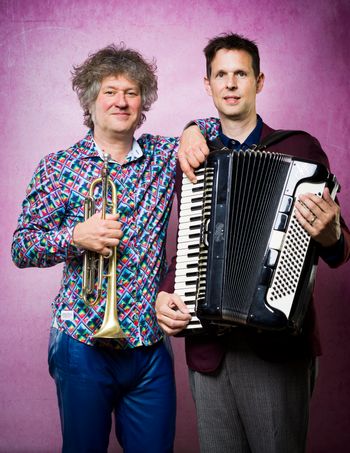 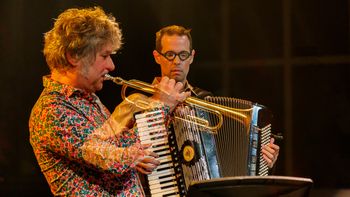 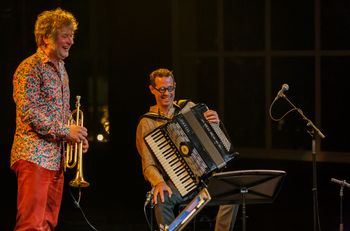 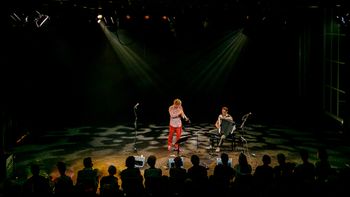 Vloeimans' "expressive, astonishingly nuanced playing is present and accounted for here, so if you have not made his acquaintance, this is as good a place as any to start. . . . In Holshouser’s hands, the accordion functions almost like a portable B3. . . . he gets so much sound and rhythm simultaneously."  - Mel Minter, Musically Speaking.

Trumpeter Eric Vloeimans is one of the best-known musicians in his native country, the Netherlands. He has led a wide variety of ensembles over the years and is a frequent guest soloist with bands and orchestras of all kinds. He has won four Edison prizes (the “Dutch Grammy”) for his recordings. His own projects have included his "chamber-jazz” Fugimundi trio; an electric project, Gatecrash, and Oliver’s Cinema, a folk-influenced trio with accordion and cello. These groups perform a wide range of highly original music and have toured throughout Europe, Asia and the USA. Vloeimans' performances and recordings with a multitude of other formations has shown his versatility. His musical talent, easy-going attitude and great sense of humour have brought him to play with national and international artists such as Mercer Ellington, John Taylor, Peter Erskine, The Rotterdam Philharmonic Orchestra, Jasper van 't Hof, Wayne Horvitz, Charlie Mariano, Nguyên Lê, Jimmy Haslip, Philippe Catherine, Joey Baron, the Holland Baroque Society, Lars Danielsson, Michael Moore, Tuur Florizoone, the Matangi Quartet, Bojan Z., Eric Vaarzon Morel, Martin Fondse, soundartist Michel Banabila, the Royal Concertgebouw Orchestra and many, many others. His musical collaborations have taken Eric Vloeimans abroad many times. With diverse artists and ensembles he played all over Europe, Indonesia, China, the Middle East, South Africa and Japan. Experiences from his travels influence his music constantly and can be heard in many of his compositions. Eric Vloeimans plays from the heart and has shown a remarkable power to create bridges and connect with audiences all over the world.

Will Holshouser is an accordionist, composer and improviser whose music draws on a wide variety of inspirations, from traditional accordion folk styles to jazz, hymns, classical and experimental music. Embracing clear melodies, pulsating rhythms and contrapuntal textures, Will’s music seeks to celebrate a polyglot attitude, engaging both written and improvisational approaches. As a working musician in New York who participates in many genres from around the world, he distills these experiences into his own compositions, exploring new sounds while staying in touch with the accordion’s expressive qualities and sense of fun. Will began playing accordion in the late 1980s when a friend gave him a musty old squeezebox as a surprise. Since that time, he has performed all over the world. Highlights have included touring and recording with violinist Regina Carter, clarinetist David Krakauer, as well as with his own groups. Three albums of his music for the Will Holshouser Trio, featuring Ron Horton and Dave Phillips, were released on the Portuguese label Clean Feed. A collaborative trio, Musette Explosion, made an album that received widespread acclaim and was featured in an interview on NPR’s Fresh Air. Will studied accordion and composition with Dr. William Schimmel. He has also studied composition with Tania León and Dalit Warshaw at Brooklyn College, and has performed with Guy Klucevsek, New York City Ballet, New York City Opera, Brooklyn Philharmonic Orchestra, Suzanne Vega, Han Bennink & Michael Moore, Uri Caine, Andy Statman, Mark Morris Dance, and others. Photo above: Merlijn Doomernik.